Selegiline (Figure 1) is a selective and irreversible mono-oxidase inhibitor, type B, (MAO-B) which is mainly used for the treatment of Parkinson’s disease (PD), as well as for depression [1; 2]. Selegiline was developed in the 1960s as a psychic energiser and is registered in more than 60 countries [3]. More recently, selegiline has been investigated as a possible therapy in ending tobacco smoking [4]. In this manner, selegiline was found to inhibit [mouse] nicotine metabolism [4]. In terms of treating depression, the selegiline transdermal system (skin patch system) was approved by the FDA (2006) for treatment of major depressive disorder (MDD) [5]. 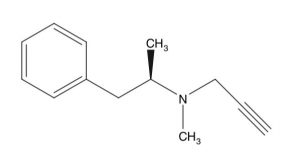 Selegiline, also known as (-)-deprenyl continues to be used for the clinical treatment of patients with Parkinson’s disease (PD) [6], with some antidepressant activity [Culpepper et al., 2008]. Selegiline is considered a type B MAO. Type A MAO is concentrated in the brain and intestine where primary substrates in the brain are dopamine (DA) and serotonin (5-HT) [7]. Type B MAO is focused in anatomic brain regions that are abundant in serotonergic neurons [7]. Currently, selegiline, a type B MAO, is used as an adjuvant treatment against Parkinson’s disease (PD) at a dose of 10mg/day [7]. Selegiline offers neuroprotection as evidenced by its ability to block the parkinsonism-inducing effects of MPTP (1-methyl-4-phenyl-1,2,3,6-tetrahydropyridine), a neurotoxin which induces abnormal behaviours similar to those observed in Parkinson’s Disease (PD) [8; 9]. To assess the degree of MAO-A and MAO-B inhibition in the body, -phenylethylamine (PEA) is measured in the urine since MAO-B catalyses the oxidation of this compound [10].

Treatment with selegiline carries out the following pharmacological effects:

Selegiline is metabolised, in the liver, into three metabolites: desmethyl-selegiline, amphetamine and methamphetamine (Figure 2) [12], with all three metabolites pharmacologically active [13]. Furthermore, selegiline is metabolised by the gastrointestinal tract, lung and liver in dogs [12]. One study assessing the metabolism of selegiline hydrochloride (HCl) – doses 10, 5, and 2.5mg – in humans found nine metabolites in excreted urine after 2 days of the ranged dose [14]. In addition, metabolites of selegiline hydrochloride comprised 44-58% of the original dose [14]. In treating depression, the selegiline transdermal system allows for delivery of selegiline into the bloodstream where it selectively inhibits MAO-A and MAO-B in the brain; this is achieved without inhibiting MAO-A activity in the gastrointestinal tract, which could otherwise lead to hypertension and possible stroke [15; 16]. 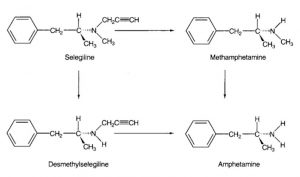 Oral selegiline dosages of 0.5mg/kg and 5mg/kg in rat studies have shown a varying effect on different organs, and selegiline’s MAO inhibition [11]. When comparing MAO-A and MOA-B, selegiline, in the rat brain, liver and bowel seemed to inhabit MAO-B in higher concentrations than MAO-A [11]. A 5mg/kg dose exhibited greater MAO-B inhibition than 0.5mg/kg dose [11]. An oral dose of 10mg selegiline is rapidly absorbed and metabolised to all three metabolites (Figure 2), with an elimination half-life of ~1.5 hours [12].

For treating depressive symptoms, the Selegiline transdermal system – EMSAM patch – has been established as a generally well tolerated system at a dose of 6mg per 24 hours, and has shown safety without tyramine dietary restrictions are not required [5; 15]. For higher doses – 9mg and 12mg – the FDA does require that a tyramine-free diet be followed [16]. Tyramine is found in many foods (70) and beverages and is normally metabolised in the gut by MAO-A [16]. At higher doses selegiline loses its selectivity to the monoamine oxidase B inhibitor (MAO-A) and has the potential to interact with tyramine [15]. In studying the efficacy and safety of transdermal selegiline in adults with major depression, and with a tyramine-restricted diet in place (up to 2-weeks post selegiline administration), a 20mg dose given for 6 weeks was found to be superior to placebo [17].

Selegiline hydrochloride (HCl) at doses of 0.5 – 1.0mg/kg has been shown to be an effective treatment in canine cognitive dysfunction (CDS) [18]. 641 dogs were administered selegiline – 0.5-1mg/kg – orally, once daily for 60 days. Dog owners were asked to rate the improvement in clinical signs and after 30 days selegiline treatment 80% of dogs had improvement in clinical CDS symptoms [18].

Overall, selegiline has been generally accepted as a safe drug since its comparative effects – fatigue, vertigo, constipation, insomnia, nausea, sweating, anxiety and involuntary movements – are identical to those observed, and caused, in placebo [9]. However, selegiline has been reported to cause insomnia in a greater proportion of patients – when treating Parkinson’s disease (PD) – when compared to placebo [19]. In addition, selegiline interacts with few other drugs such as pethidine and fluoxetine [19].

Adverse Effects and events associated with selegiline, in conjunction with fluoxetine, include, agitation, hypertension, mania, sweating, shivers and tachycardia [19]. In addition, it has previously been advised to avoid combination of selegiline with pethidine [19]. Selegiline is usually well tolerated when administered alone; however, frequent adverse events include insomnia, nausea, headaches and dizziness [19]. Selegiline patches (EMSAM) has very little side effects, compared to other antidepressant drugs [16]. Skin irritations have been noted with EMSAM use, as the system is a transdermal application [16].

There are no reviews yet.

Be the first to review “Eldepryl 5 mg” Cancel reply