Trazodone, [Fig.1] a triazolopyridine derivative belonging to the class of serotonin antagonist an reuptake inhibitors (SARI), is used in the treatment of depression [1] and is currently approved by the FDA to treat major depression [2]. Trazodone has been branded as Desyrel – trazadone hydrochloride (HCl), and its uses, besides its antidepressant activity, include treating medical and psychiatric disorders [3], along with the treatment of post-traumatic stress disorder (PTSD), insomnia, anxiety disorders, obsessive compulsive disorders (OCD), eating disorders, abuse of substances, impediments in cognitive functioning, sexual dysfunction, and particularly in rehabilitation following acute ischemic stroke [3; 4]. Specifically, trazodone HCl [Fig.1] is considered an anti-depressant agent. The way trazodone works is through its antagonism of the serotonin receptor (5-HT2A), alpha 1 and histamine H1 receptors, and this permits the drugs hypnotic effects (at low doses), whilst a high trazodone dose blocks serotonin transporter (SERT) and 5-HT2A allowing for its antidepressant activity [2].  In addition, due to trazodone’s strong antagonistic action at serotonergic type 2 (5-HT2) receptors it is known to quickly improve sleep [5; 1]. Further, trazodone’s pharmacological mode of action is such that a very low dose – 1mg trazodone – can block half of the brain’s 5-HT2A receptors [1].

Trazodone is used for the treatment of depression [2]. Also, trazodone is widely used in treating insomnia due to its capacity to normalise sleep behaviour in depressed patients [6]. Trazodone’s half-life is between 5 and 23 hours [8].

It has been identified by Jaffer et al (2017) that a ‘significant number of [clinical] trials have evaluated…the effectiveness of trazodone in the treatment of insomnia.’ The clinical definition of insomnia is a ‘subjective disorder’ in which an overall poor quality sleep pattern is observed for sufferers, increasing the risk of other complications such as hypertension, stroke and mental disorders [9]. Out of 45 studies, it was shown that trazodone was indeed effective in treating insomnia [1]. In addition, trazodone was evaluated as being effective in decreasing sleep latency and increasing the duration of sleep [1]. In a randomised study assessing the individual and combined (using trazodone (100mg)) cognitive behaviour therapy (CBT) on primary insomnia, results showed that both single and combined CBT was effective in treating short-term chronic primary insomnia [10]. Further, a meta-analysis of randomised placebo-controlled trials evaluating trazodone for the treatment of insomnia concluded that trazodone is a well-tolerated hypnotic for patients suffering from primary and secondary insomnia [9]. Trazodone assists primary and secondary insomnia through decreasing stage 1 and REM duration; increasing slow-wave-sleep (SWS) (stages 3 and 4), and improving early morning awakening (EMA) and sleep duration and efficiency [11].

Anxiety, or generalised anxiety disorder (GAD), is a commonly occurring psychiatric condition wherein disproportionate worry interrupts daily life [12]. In addition, anxiety disorders share characteristics of excessive fear; the anticipation of a future threat [13]. Importantly, guidelines suggest that antidepressants are the first-line treatment for GAD [12], and, according to the Diagnostic and Statistical Manual of Mental Disorders Fifth Edition (DSM-5), anxiety disorders include: panic disorders (PD), generalised anxiety disorder (GAD), social anxiety disorder (SAD) and separation anxiety disorder [13]. Table 1 and figure 2 summarise the neurological changes upon perceived anxiety. One study measured the efficacy and tolerability of trazodone [14] administered intravenously in a group of patients diagnosed with Major Depressive Disorder (MDD). Results indicated that trazodone does have a statistically significant impact on the Hamilton Depression rating Scale scores derived from participant responses [14]. Trazodone, in conjunction with – and independent of – panic management was used to assess its effectiveness of panic disorder [15]. However, results displayed that both panic management and trazodone were marginally effective when compared to placebo [15].

Table 1. Anxiety leads to changes in the brain. 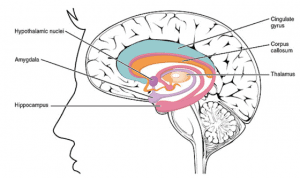 Trazodone use in dogs

Interestingly, trazodone is used to decrease anxiety in hospitalised dogs [16]. Previously, trazodone has also been described as treating anxiety disorders – alone or in combination therapy – in dogs, effectively reducing anxiety and improving patient welfare [17]. In a prospective open-label trial experiment, 36 client-owned dogs were recruited to document the calming effect of trazodone hydrochloride (HCl)  after orthopaedic surgery [17]. Results suggested that trazodone was a both safe and efficacious medication that enhanced calmness during the recovery period post-orthopaedic surgery [17].

Once  consumed, trazodone peaks in plasma after 1 hour of ingestion, or 2 hours when consumed with food [3]. In an investigation into the pharmacokinetics of trazodone in eight healthy subjects [18], trazodone was administered orally at 100mg [18]. Subjects ingested 100mg trazodone with, and without food and results showed that food intake lowered serum concentrations of trazodone; however, consumption of trazodone in both instances did not affect bioavailability of trazodone, but that trazodone is highly metabolised. This owes to the low recovery in urine of intact trazodone [18]. Single-dose trazodone – 50-100mg/day – was given to 75 depressed patients who experienced sleep disorders [19]. Over two weeks, participants were first given an initial dose of 50mg/day, in which – over the remaining four weeks – this dose rose to 50, 75 and 100mg/day; a total of 6 weeks [19]. Interestingly, results showed trazodone, at a 50-100mg/day dose improved the sleeping disorders experienced by participants, after two weeks of treatment [19]. In this study, trazodone was recommended to be consumed before bedtime [19]. Trazodone’s profile – in a prolonged release context – was compared with paroxetine in treating major depressive disorder (MDD) [20]. Given to 55 patients at a dose of 150-450mg/day, with mean dose being 305mg/day, trazodone – and similarly paroxetine (given to 53 patients) – was concluded as having antidepressant effects [20] over the six-week period. In addition, authors noted that trazodone might be advantageous for depressed individuals with sleeping difficulties [20].

Trazodone was administered – starting at 4mg/kg every 12 hours, and increased to 10 to 12mg/kg. Dose did not exceed 300mg per dose [21]. Results indicated that treating hospitalised dogs with trazodone – over a broad dose range – can alleviate some symptoms of stress: lip licking, panting, whining, improving these behaviours after 90 minutes of trazodone treatment [21].

Out of 200 prescription drugs trazodone HCl was ranked at 29th as most prescribed drug, in 2010 [17]. This has provided a long safety record of use for the antidepressant [17]. However, the synthesis of prolonged-release trazodone tablets in 1981 were marketed in order to limit high (peak) plasma trazodone concentrations [6]. Adverse effects have been recorded with this high peak trazodone plasma concentration, which may interfere with the therapeutic dose of trazodone in depressed patients [6]. Trazodone [acute] overdose has previously been reported in the literature [23] and in the adult population [Zahran et al., 2018]. In one case, an individual suffered from severe depression, and was treated with 100mg/day trazodone and fluvoxamine [23]. Reported cases of trazodone overdose show that dose ranged from 350mg – 8g, with some records of blood plasma concentrations of above 25g/mL [23; 24] – therapeutic concentrations are 1-1.5g/mL [23; 25]. It is also important to note that data on toxic doses in children have not been established [25]. For dogs, where the LD50 of trazodone is 500mg/kg, trazodone overdose is signalled by sedation and hypotension, with seizures and tremors occurring at the serotonin agonist range of 6-8mg/kg [26]. In terms of hepatotoxicity – damage to liver cells – tricyclic antidepressants and monoamine oxidase inhibitors (MAOIs) have higher capacity to cause liver damage [27]. Data evaluating whether trazodone demonstrates action against compulsive behaviours has yet to be determined from controlled studies [28]. One randomised, double-blind placebo-controlled study of 50-100mg doses of trazodone on 172 alcohol detoxified patients revealed to have negative consequences for alcoholics – post-detoxification [29]. Authors note that further studies must be conducted to assess trazodone – safety and benefits – on improving sleep for recovering alcoholics [29], and that trazodone is not adequate in treating sleep disturbance in this context [2].

Side effects of trazodone include: nausea, anxiety, insomnia, dry mouth, headaches, Dizziness, anorexia, diarrhoea, constipation, tremors and sexual dysfunction [30; 2]. Further, trazodone exhibits less anticholinergic effects indicating that this antidepressant has less cardiotoxic ability when compared with other antidepressants [2]. Trazodone has previously been studied in alcohol-dependent subjects in which results indicated trazodone might reduce relapse rates after acute detoxification [28]. As trazodone is an SSRI and newer antidepressant, it has been attributed to weight gain [27]. A recent ‘SSRI discontinuation syndrome’ has detailed the withdrawal symptoms of which commencement of withdrawal occurs within one week of discontinuation [31]. Symptoms, commonly, range from dizziness, headache nausea and lethargy, which are resolved within 48 hours of recommencement of SSRI uptake [31].

There are no reviews yet.

Be the first to review “Trazodone” Cancel reply